In an effort to attract a new generation of young fans, teams are investing heavily in gamification, free-to-play games, and other second-screen experiences. As strange as it may seem, teams and leagues now need to offer an experience that rivals that of TikTok and Instagram.

The comfort and varying streams of stimulus that a fan is granted at home, such as watching the game on tv, checking their phone for social media updates or messages, and having their laptop open to check the stats of the game, all contribute to a complacent fan that doesn’t really need the traditional stadium experience. This idea intensifies as you move down generations; the younger the fan, the more likely a traditional live experience will not carry the same appeal and romantic nostalgia that it does for some of the more seasoned fans.

Technology is breaking down the barriers between the home and the home stadium. As one report notes, “Technology is now an integral part of the way fans consume sports – Nearly 70% say emerging technologies have enhanced their overall viewing experience, both inside and outside the stadium.”i The article continues, “if [fans] enjoy their tech experience, a majority (56%) of fans would attend more matches while 92% would spend more on online subscriptions.”ii 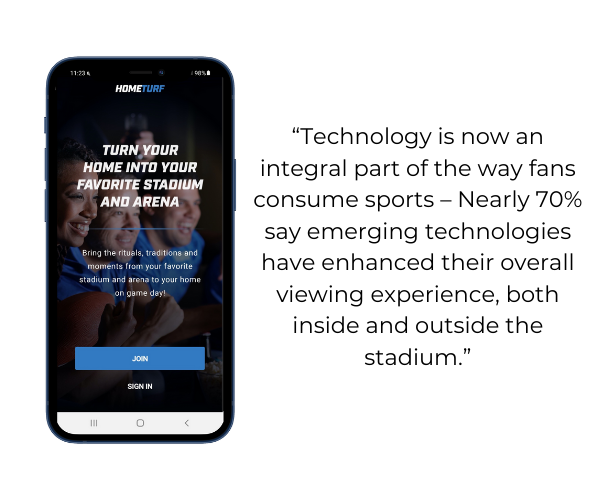 Recognizing this trend, Venuetize is working with our clients to deliver entertainment value to their fans regardless of whether they are in the arena, on their sofa or somewhere in between. This week we are proud to announce a partnership with HomeTurf – “the ultimate sports sidekick” – to bring the stadium experience to fans at home, coming this fall. HomeTurf’s products include in-game trivia and polls, real-time stats and analytics, replays and animations, and “Team Screams” to allow fans to talk smack throughout the game. HomeTurf synchronizes with television broadcasts and can even integrate with stadium jumbotrons to bring the same game-day stadium experience to fans at home. The product has both advertising and sponsorship opportunities, allowing our clients to monetize the experience at the same time they are increasing engagement with their fan base.